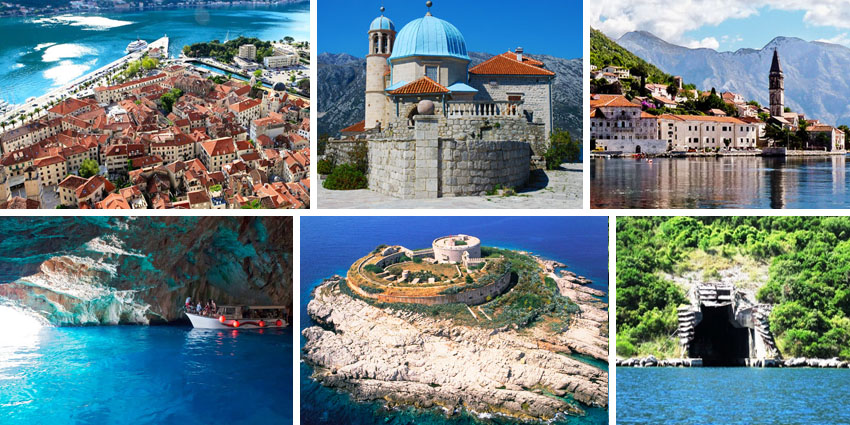 Price:  500 Euro for up to 6 passengers, (every additional passenger has to pay 80 Euro)

Please let us know if you prefer licensed tour guide for whole boat tour? It will cost additional 50 EURO

In this tour you get a chance to explore all hidden gems of the Boka bay.

Our first stop is Blue Cave, which was created at the bottom of 100 meter cliff as a result of a thousand years impact of sea waves on porous rocks of Luštica. Through the entrance sunlight enters its interior, and wraps around the surface of the water making great shades of blue by which cave got its name. You will see these amazing colors on your body as well once you jump in it. On the way back we will make brief stop next to the Mamula Island, on which prison was made in 1853.

Mamula Island served as NOTORIOUS PRISON during both world wars known as “Kampo Mamula”. From boat you will be able to see small beach called “Dobrech” which is located in small ravine and it is only accessible from the sea side. On this beach there is a small restaurant so you can have a lunch or quick snack if you wish! Going pass old Yugoslavian army base called “Pristan” we will make stop in one of the three submarine pens used during Second World War to hide and repair submarines. Place which will also amaze you is old Island Lady of the Rock which is artificial island made in 15 century as a monument to the sailors from Perast. Under the Lady of the Rock there is 196 shipwrecks sank by people of Perast while defending Kotor from Venetian and Ottoman Empire. After visit to the island you will get a chance to explore old town Perast as well. In the past Perast was first line of defense of old town of Kotor. In Perast you will also be able to see clock tower which when it was build in 1713. It was the tallest in Europe.  During panoramic boat ride you will be able to see places like Saint “Mathews Church”, “Ladies temple”, abandoned village “old Stoliv”, narrow passage “Verige” which is only 300 meters wide, Bay of Tivat and Herceg-Novi and new yacht marina “Porto Novi”.

On Our way back towards Kotor, next stop is “MUSSELS FARM” where you will taste traditionally cooked mussels. This Mussels farm is located in the heart of the bay and it has one of the most spectacular views of the bay!

During our stay on a Mussels farm you will see how the mussels are plant and grown!! With this unique tour you will be able to eat them cooked directly from the sea water!!!!!

After a nice meal you will taste the homemade wine which is 100% organic.

Also there are some kayaks at your disposal and small beach so you can have some fun while mussels are being cooked!

Also in this tour you have 30 minutes of optional waterskiing, water tubing or wakeboarding!

After mussel farm we will proceed towards Kotor where our tour ends.

1.Do you have life jackets for adults and children?
Yes, life jacket for adults and children are available on board, just ask your skipper and he will pass to you.
2. Is there passengers age limit?There is no  age limit.
3. Is there fresh water available on the speedboat?Yes, just ask your skipper and he will provide it.
4. Is there any hidden or additional costs?There are no any hidden or additional costs.
5. Can I swim in the Blue Cave?
Yes you can, your skipper will explain to you everything when you arrive there, please follow his instructions because he is the one who cares about your safety at all times.
6. Can I pay with a credit card?Yes. You can pay by Master, or Visa card when you arrive just before tour commence, no advance payment required.
7. What is the cancellation policy?
Kotor boat tours is NOT asking for advance payment, you pay on site just before tour commences.
Kotor boat tours reserve the rights to cancel the tour if bad weather and you will get full refund.
Kotor boat tours reserve the rights to cancel or postponed the tour in case there is no minimum passengers assigned for the tour. (Min required is 6 passengers)

Speedboats are equipped with music, shower and Bimini sun shade. 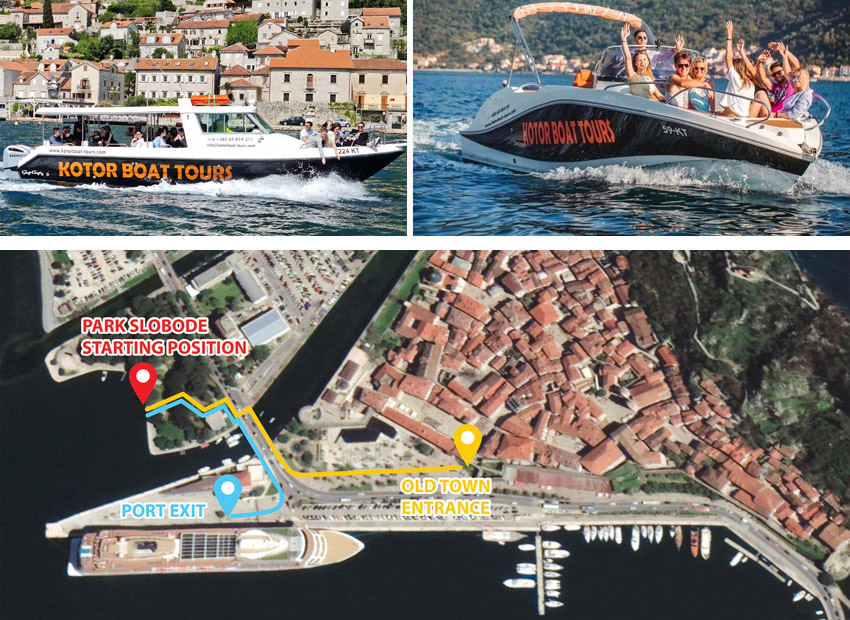